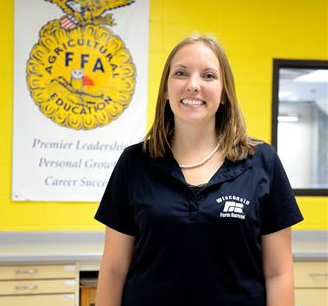 MISHICOT — This is one teacher who definitely deserves an “A” for shining a spotlight on agriculture.

Jamie Propson is in her sixth year of teaching agriculture to Mishicot students in grades seven through 12, in addition to advising the high school’s FFA chapter. Each of the previous two years, she received an award for her work in furthering agricultural education.

Last week, her efforts again were recognized, this time as part of the Culver’s restaurant chain’s #FarmingFridays campaign. Throughout the day on Sept. 22, Culver’s used its social media accounts on Facebook, Twitter and Instagram to showcase what Propson and four other FFA advisers nationwide do on a daily basis as part of their careers. Photos and videos were shared, and followers were able to ask questions.

“#FarmingFridays is a way for us to give agriculture influencers a platform to advocate for agriculture,” said Jessie Kreke, senior marketing manager for Culver’s, an avid supporter of the agriculture industry. “We definitely need to further agriculture education, and we want to promote that with the FFA members and students.

“That really starts with the agriculture advisers. They are the ones who are recruiting and inspiring these students every day in their classrooms. We also know there’s a shortage of agriculture educators, so we wanted to be able to showcase those careers on #FarmingFridays.”

Propson was proud to be among the five advisers selected for the national Culver’s campaign. She was recommended through the National Association of Agricultural Educators.

“It’s very exciting,” said Propson, who’s active on social media, especially Twitter. “I feel honored to have been selected. There are hundreds of ag teachers out there, and I hope this really helps share the stories of what we’re doing to help educate students. Agriculture is the backbone of our country in a lot of different ways, and the more people who know that, the better.”

Propson lives in Francis Creek. She grew up on a farm near Denmark and was involved with 4-H and FFA before continuing her education at UW-River Falls.

“I love teaching agriculture because each day is different, and I can constantly see students make connections between our curriculum and their lives,” she said.

#FarmingFridays is in its second year. Last week’s campaign was timed to coincide with National Teach Ag Day, which was Sept. 21.

In 2016, Propson was one of six national recipients of an Outstanding Young Member Award from the National Association of Agricultural Educators. In 2015, she received a Top Tech Award from Lakeshore Technical College for her work in agriculture education.