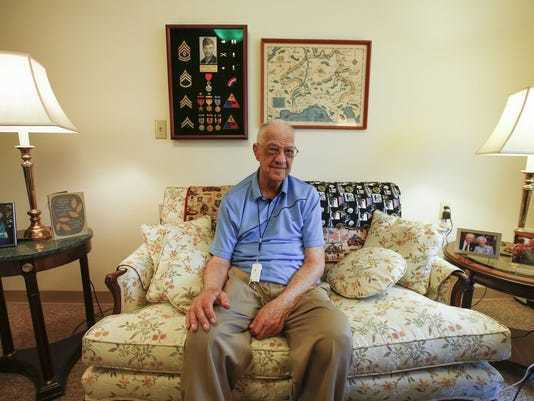 MISHICOT – Longtime Mishicot educator Otto Schultz was a man who loved his community as much as they loved him.

Schultz, who died in late January at age 101, served as superintendent of the Mishicot School District for nearly four decades, and those who knew him say he changed the district forever – in a good way. He worked diligently in the 1950s to modernize the rural school district, changing school boundaries and transitioning students from one-room schools to today’s elementary and secondary schools. In 1979 the Mishicot Elementary School was renamed the Otto H. Schultz Elementary School.

“I worked for a number of superintendents, I have never worked for a better one,” said John Risch, former Mishicot school administrator who worked under Schultz as a high school principal. “I never met a more intelligent superintendent. Otto knew everything that was going on in the district, even knew the kids. He was great with people and could evaluate them pretty well. I don’t know if there are any truly natural born leaders, but if there are, he was one.”

Circumstances helped him along. Schultz developed a love for learning and school early, but it was the kindness of a teacher who helped pave the way for his own college experience and later career.

But a science teacher who took a special interest in Schultz offered him a loan for his first year of university.

“I had been a wonderful student in his class, and he thought I would be a great teacher,” Schultz recalled. “Without him, I wouldn’t have been able to go.”

Schultz borrowed the $27 for the first semester, which included book rental, and eventually paid the teacher back. He graduated in 1940 from the Milwaukee State Teachers College and took a job as a supervising principal in Mishicot teaching math and science.

He left his teaching job to serve in the United States Army from June 1941 to March 1946. He achieved the rank of captain and was awarded a Bronze Star Medal. After victory was declared, Schultz said he spent some time in Europe and his division was one of the first to come upon Dachau concentration camp in Germany.

“I saw the dead bodies piled in boxcars,” Schultz said in 2017. “I saw that. We also saw some of the prisoners who were still alive. We had to make sure they were taken care of.”

After the war, he taught briefly at the Milwaukee Vocational School and the Milwaukee State Teachers College before heading back to the Mishicot School District, where he served as superintendent for 37 years before retiring in 1983.

“I spent a lot of time going out to little rural school districts, telling them it was time to build a high school,” Schultz said in 2017. “I had the ability to move the school board in the right direction. I discovered there are a lot of leaders out there, but you have to find them. Once you find them, they’ll work very hard for you.”

Risch said he was impressed with the quality of staff Schultz assembled in Mishicot.

“He had amazing drive,” Risch said from his California home. “I was fortunate to have him hire me in the first place. I thought right away, this is a guy I want to work for. When I was hired on, I was amazed at the great staff I had. I came from a school district south of Milwaukee and thought they had a good staff. But Otto’s staff was great. It was a nice place to be.”

Schultz could be all business, but he had a sense of humor and was very fair as a boss, Risch said. When Risch first came aboard, he signed two contracts with the district unintentionally. When Schultz realized his own mistake, he insisted on honoring the two contracts and paid Risch double for his first month until the error was recognized and resolved.

“A lot of guys would have just buried one of the contracts in a stack of papers and forgot about it,” Risch said. “Otto always wanted to do the honorable thing.”

“He made Mishicot schools what they are today,” Risch said. “Without Otto, who even knows if there would be a Mishicot School District.”

Schultz retired on his 65th birthday, and became involved in the formation of the Mishicot Area Growth and Improvement Committee, AARP and served on the State of Wisconsin Retired Teachers Association board. He was elected twice by the Wisconsin Retirement System Annuitants as their representative on the Employee Trust Fund Board and Legislature Retirement Research Committee.

His first wife, Dorothy, died in 1987. He married his second wife Kathleen in 1992, and they lived in Madison for 20 years. Kathleen died in 2012, and he moved to Manitowoc that year.

Schultz is survived by two sons, John, who lives in Manitowoc, and Alan, who lives in Appleton. Another son, Otto James, died at 65 of pancreatic cancer. In his later years, Schultz enjoyed spending time with his many grandchildren and great-grandchildren, as well as visiting with former students.

His father’s desire to help students, family, and those around him become the best version of themselves never wavered, son John said.

For Schultz, that meant doing the best he could do in Mishicot.

Risch said one day when he was riding in Schultz’s car on one of the many drives to meetings, he asked the superintendent why, with all he had to offer, he had never relocated to the Madison, Milwaukee or Green Bay school districts.

“He said, ‘I just love Mishicot,’” Risch recalled. “He said, ‘This is my town.’ I think the people were able to tell that about him, that he had such a love and devotion to the community, and that is why they loved and respected him so much.”